The Northern Virginia Outrach was formed when a member of the Washington DC church, Solomon Olubiyi, residing in NOrthern viriginia, began ministering to the clients and friends who frequented his auto repair shop. He saaw a hunger for the Gospel in the hearts of these poeple and relayed this information to the pastor, Reverend Josephine McElveen. She prayed about the spiritiual need in this location and then talked to the district superintendent about the possibility of starting an outreach ministry in Northern Virginia. It was decided that a work in that area would begin as an extension of the D.C. church.

Milestones for the Northern Virginia Work

With tremendous support from the D.C. congregation and regular evangelistic outreach efforts, the fellowship, experienced many milestones and victories. 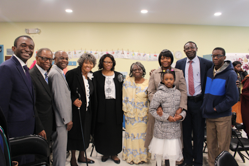